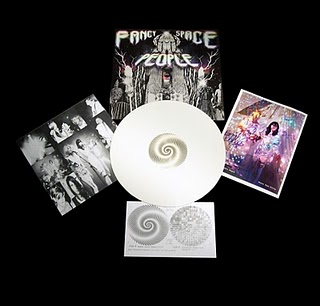 Yes, it is me, that mysterious blonde in Fancy Space People who came and went. Dispite rumours the decision to leave was all mine and 75% personal. Well, they just released their first Vinyl E.P., recorded at Coldwater Studios (Smashing pumpkins studio) and released on Starry Records. It looks and sounds great, and yes I think that's me singing backup. That was nice of Don (or maybe not, who knows?) to put the face of this ex-band member all over the album. I don't know where to buy it, mine was free, but heres a link to a single:
http://fancyspacepeople.bandcamp.com/